It doesn’t matter who you ask in the world, everyone has heard of the Great Pyramids of Giza. Everyone has seen the famous photos of their mighty presence bursting from the Sahara desert. Most people dream of going to them; a true bucket-list staple. I was one of those people. Ever since I got my first taste of Ancient Egypt in my first year of primary school, the pyramids cast a spell-bound desire over me to see them for myself.

On Sunday 2nd April 2017, I added perhaps the biggest and most proud tick to my bucket-list. We left our Giza hotel early in the morning. This way, we could beat the hordes of crowds at the pyramids, and maximize our time there.

A gentle warmth lingered in the early Cairo air as our bus traced its way along the city’s chaotic labyrinth of roads. Sporadic white clouds drifted past the blue of the sky. One of the major misconceptions of the pyramids, which is perpetuated by the typical photos, is that they are in the middle of nowhere, requiring a daring trek into the Sahara to be reached. Cairo is the largest city in the Arab world, ever sprawling and expanding its borders. The pyramids have effectively been sucked into this sprawl and the city continues to spread around them.

Our bus turned a corner. From behind the green leaves of a palm tree, the tip of the Great Pyramid revealed itself. There is a strange feeling of satisfaction and disbelief which buzzes around your excitable body when you are about to explore the world’s last remaining wonder of the ancient world. What was forever on a screen or a photograph was now in front of my very eyes.

We left the bus and eagerly purchased our tickets before proceeding through security, which was similar to airport security. I must point out that I was impressed with the security here. It was taken very seriously and I felt very secure while there.

After leaving the security building, a short walk up a slope revealed the pyramids, all three aligned in their unanimous splendour. Our tour guide, Sam, gave us an introductory talk about the pyramids’ history before we set off to explore on our own.

The three pyramids are each dedicated to Khufu, Khafre and Menkaure and are around 4,500 years old. They are perfectly aligned with the stars and their measurement are near flawless. For thousands of years, the tallest of the three pyramids was the tallest man-made structure in the world. It wasn’t until 1889 that the pyramid lost this accolade when the Eiffel Tower became the tallest structure.

It was surreal to stand before a structure which had existed for thousands of years; a building which had been around long before me and will continue to stand long after I’m gone. There is something rather awe-inspiring and humbling about that. Then there’s their size. They are so much bigger than I expected! Most of those famous photos show them from a distance, where it is harder to judge their size. But standing beneath them, they certainly make you feel tiny.

After Sam had talked to us about the pyramids’ history, we were free to explore the complex. The first job on the agenda was to get a must-have photo touching a pyramid stone, and then one sitting on the pyramid. Where else in the world can you casually sit on an ancient wonder?

After this necessity, I wondered around the pyramids for a while. Every angle, every position gives you a different view of these magnificent buildings. You could spend the whole day wandering around and seeing them from all angles. I filled the free time doing just that, wandering and just pointing the camera and shooting.

After this free time, Sam led us to a viewpoint higher on the Giza plateau, where a panoramic view of the three pyramids waits to be enjoyed. 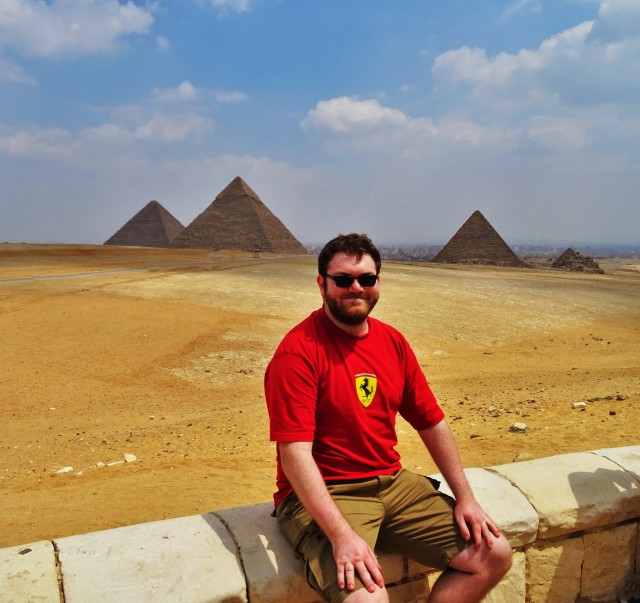 After draining more of the power from my camera, our camels awaited to take us back down to the pyramids. The camels walked leisurely along the plateau, allowing me to photograph with one hand, and hang on for life with the other; an art I developed during my first camel experience in Dubai.

After 30 minutes of grazing the plateau on the camel, it was time to board our bus and head a short drive down the plateau to visit the sphinx.

Like its pyramid neighbours, the sphinx has become a world-famous icon. With the body of a lion and the head of a man, the face is said to portray the sculptor himself. It once had a beard but that sadly broke away and is now inside the Egyptian Museum.

The sphinx was another bucket-list tick, but its majesty and awe was not quite at the level of the pyramids for me. Also, there viewing platform was very crowded and busy with other tourists, making it one of those attractions where you have to bully your way through crowds, cameras and selfie sticks to see it. Having said that, it was a must-visit and I am so glad to have seen it.

After the sphinx, it was time to bid a brief farewell to the Giza plateau to begin the long drive down-Nile to Luxor. The pyramids had been everything I’d always imagined and more, and I was certainly glad they would not be the last view I had of them during my Egyptian trip.

Stay tuned for my next post which will cover tips and advice for your visit to the pyramids.

Have you ever visited or are the pyramids on your list? Let me know in the comments below.

As always, all photos used here are owned by myself. Many thanks for reading and happy travels.

4 thoughts on “The Great Pyramids of Giza – my visit.”

Keeping track of my worldwide visitors